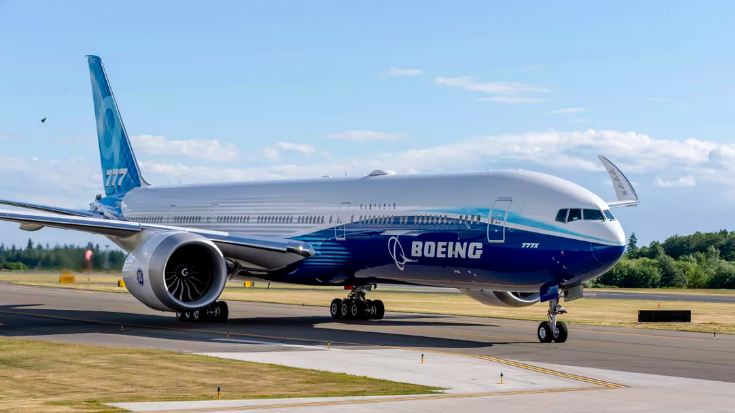 The aircraft’s design is intriguing: Folding wingtips will let the 777X fit at existing airport gates while still giving the wings the lift they need.

After a delay Friday due to windy conditions, Boeing’s newest airliner completed its first flight Saturday when a 777X test aircraft landed at Paine Field north of Seattle after a four-hour cruise over Washington state. A next-generation model in the 26-year-old 777 family, the 777X is the first commercial aircraft with fold-up wingtips.

“This major milestone for the #777X airplane program begins the next critical phase of testing as we work towards certification and then delivery to customers in 2021,” Boeing said in a tweet after the flight.

Like Boeing’s 787 Dreamliner, the aircraft is made from composite materials and has larger windows and a redesigned passenger cabin. Able to carry more people and fly farther than existing 777 models, it’ll be the most efficient twin-engine plane in the world, Boeing says.

The plane’s standout feature is the movable wingtips that’ll cut the aircraft’s enormous wingspan from 235 feet down to just under 213 feet, letting the 777X fit on existing airport taxiways and at terminal gates where older 777s can operate. The Airbus A380’s 261-foot wingspan forced airports to make expensive modifications when the double-decker plane debuted in 2007, something Boeing wants to avoid.

The successful flight is welcome news for Boeing as it continues to face fallout from the twin crashes of its 737 Max that killed a total of 346 passengers and crew in 2018 and 2019. On Monday, the company announced that the Max will stay grounded until at least the middle of this year.

Boeing rolled the first 777X out of its factory in Everett in March, but it soon encountered problems that delayed this test flight. In June at the Paris Air Show it said that excessive wear inside the 777X’s General Electric GE9X engine was delaying its approval. Built for the 777X, the GE9x is the largest and most powerful commercial jet engine ever built.

Then in September one of the test aircraft explosively depressurized during a test of the flexibility of its wings (photos published by the Seattle Times showed a massive tear through the fuselage). And two months ago the company announced it would abandon plans to use robots to automatically assemble the plane, handing the job back to human machinists.

Boeing says the 777X could begin passenger service as early as next year. So far it has orders from eight airlines, including British Airways, Cathay Pacific, Emirates, Lufthansa and Singapore Airlines.

But before passenger service can start, the Federal Aviation Administration and other aviation regulatory bodies around the world will need to certify the aircraft, and its flip-up tips, as safe. According to an FAA document published in May 2018, Boeing had determined that “a catastrophic event” could occur if the airplane wingtips aren’t properly positioned and secured for takeoff and during flight.