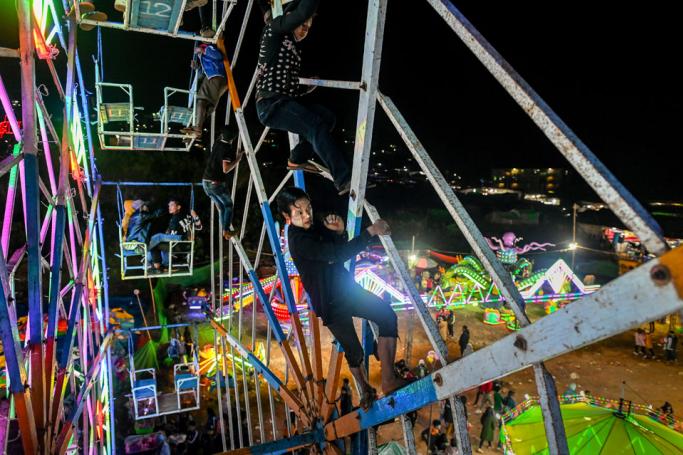 Aung careers towards the ground, hanging from one arm on the basket of one of Myanmar’s human-powered Ferris wheels, reliant on gravity-defying agility and split-second coordination honed since the age of nine.

Fireworks shower down onto jubilant crowds nearby from stunning, if treacherous, hot air balloons at the annual festival in Shan State’s capital Taunggyi.

As ear-splitting techno pumps out from the fairground, the team of lithe youngsters coax captivated onlookers onto their Ferris ride, hamster-wheeling it round to fill up the baskets.

Aung Sein Phyo, 22, blows his whistle and then scampers with his teammates up the 20-metre (60-foot) high structure.

The wheel starts to turn, getting faster and faster, each worker adeptly leaping away to safety just before they crash into the ground.

As the ride’s kaleidoscopic neon lights become a blur and its delighted passengers cheer and scream, Aung jumps underneath — almost onto his back, like an extreme limbo — lunging up to give each basket an extra shove.

“I started working on these when I was nine,” he tells during a break. “My parents didn’t like me doing it but I did it behind their backs,” he confides with a grin, acknowledging it is “dangerous” work.

Aung is one of several hundred young men working Myanmar’s Ferris wheels — known as ‘char yahat’ — at fairgrounds and festivals across the country.

For nine months a year his team of 15 are on the road and they work without a day off, earning between 70 and 100 USD a month before resting up during the monsoon season.

“We have a really good team spirit,” says Aung, admitting they sometimes cannot resist teasing their female passengers. “When the girls go up high and we swing the baskets, they get really scared and scream,” he says smiling — although he adds the team always chivalrously help them off the ride so they leave happy.

Aung says he has no regrets about forgoing an education but admits to sometimes missing his family. A more normal life would not be for him, he insists, and instead plans to ride the wheel as long as he can.