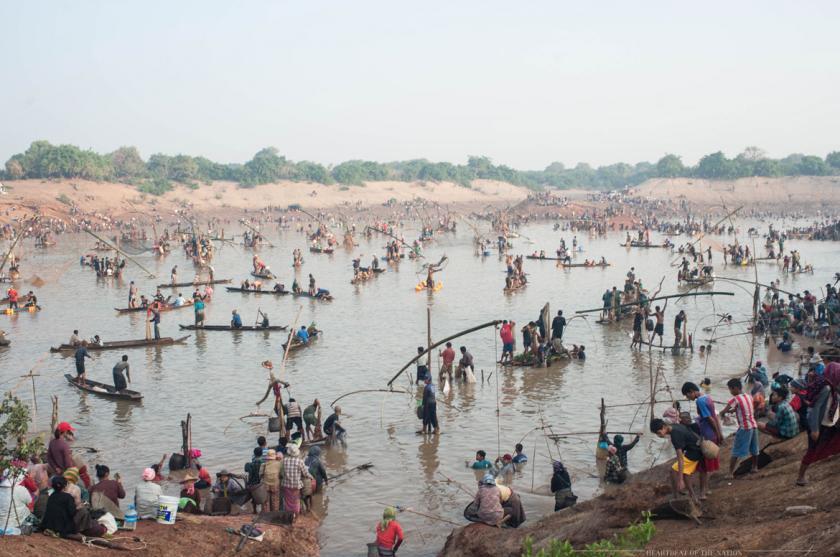 The aquatic organisms in the 25-acre Daung Din lake in Kyaik Mayaw township, Mon state, have a pretty good life for most of the year. Living a protected existence, they are cared for by the local villagers and isolated from natural predators found in the larger waterways of Myanmar.

Their privileged existence comes to an abrupt end, however, on January 16 each year. For this is the date that the villagers of Yay Pu Kawt Set descend upon the lake, with their scoop nets and paddles, in a frenzy to capture as many fish as they can manage in one day.

Old ladies and young boys, married couples and families all take part in this annual event. Those who do not participate in the fishing sit upon the muddy shores and watch over the water-fueled fun. Much like a mini water festival in the cool season, everyone manages to get wet.

Despite the frenzied jumping, splashing and net-casting, it’s an organised event that’s been part of the village’s identity for decades. The villagers wake early in the morning, and gather around the muddy waters for a 7:30am start. 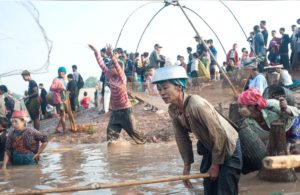 Just as the clock ticks over to half-past, a penetrating whistle rings out – deadening all other sounds around the lake. As soon as it stops, the hunt commences.

The villagers are transformed from patient bystanders to excited, lake-leaping hunters with all the energy of a five-year-old on Christmas day. Adults and children alike yell and cheer, as they throw their nets and swing their bodies across the water.

Some villagers bring their small bamboo-crafted stages into the lake, giving them greater access to the larger fish towards the middle. Women and children play at the water’s edge, scooping the water with small nets.

When someone nets a large fish, everyone yells out. The splashing and good-humoured chatter is punctuated by the occasional “whoo”s and “heeey”s when someone drags a large catfish or bream out of the water.

No one knows exactly when was the festival started, but it’s an event everyone looks forward to each year. People prepare weeks in advance, fixing their nets, spears and rods.

“The festival is just for fun, not for business or profit – that’s why everyone has such a great time. There are no other celebrations quite like this one throughout Myanmar,” said Saw Myint Wai, the Administrator of Yay PuuKawt Set village.

“I fished in the lake since I was young. Now my hair has turned grey, but I come here with my grandchildren,” said U MyintSoe, a fisherman from the nearby Thayet Kone village.

This year U Myint Soe returned to pass on his knowledge of the area to his grandchildren, explaining how plentiful and important the lake is for the people.

U Myint Soe’s family slept beside the lake, like many of his fellow fishermen-families. Fishermen from Myawaddy, Hpa-An, Mawlamyine, Mudon and other townships also arrive to the village, setting-up camp on the lakeside the night before the fishing festival.

“It’s actually really hard to sleep the night before the festival, because everyone is so excited and as the night sky is so beautiful. I watched the bright moon rising last night, and people said that this would make the fish even tastier in the morning,” said Ko Chan Mon, who is from Mawlamyine.

Most people create small fires, and chew the fat. Some old men share stories of the lake, and exaggerate their hauls from previous years.

The ‘Daung Din’ lake itself also has a unique history, tales of which are still passed on through the generations.

Many hundred years ago, so the legend goes, a majestic Kayin Palace overlooked the lake. One day, a supreme monk (the “Arhat”, capable of reaching nirvana) went to the palace to accept an offering of food. Later that day, however, the fishermen didn’t catch any fish. This upset the king, who blamed the Arhat for their empty fishing baskets.

As a non-Buddhist kingdom, the king wanted to lay down the law against this foreign religion – and so spat in the Arhat’s bowl. Feeling equally outraged, the people followed their king by rejecting the Buddhist alms. As if by karma, the whole palace was later swallowed up by the earth and disappeared. The whole area turned into a massive lake, and each year the villagers celebrate the myth.

Whether people believe the story or not, villagers and travelers still pay respect by building small palaces in the trees, where they make offerings of food for the nat sprits before the festival.

The traditions also ensure that people adhere to good behavior during the festival, such as abstaining from drinking and quarreling beside the lake. If they do so, the fish will disappear, according to the villagers.

As soon as disagreements break out, U Win Maung, one of the organisers, sounds out a warning across the lake with his loudspeaker.

“If anyone argues or fights, the fish will disappear or turn into mud. They need to catch the fish in the right spirit, so if anyone gets out of hand I warn them,” said U Win Maung. 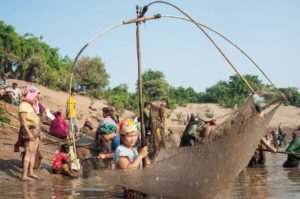 Throughout the rest of the year, fishermen from the surrounding villages – Nga Pu Inn, Kyone Kwal and Yay Puu Kawt Set – take care of the lake. Each village takes it in turn to protect the lake from overfishing and degradation. Other times of the year, fishing is strictly prohibited.

During the rainy season the lake swells and fish from the Chaung Hnit Gwa River enter the lake. When the lake begins to shrink in the hot season, the villagers ensure the water levels don’t drain too much. Great white sheat fish and climbing perch are the main fish in the lake, but the sizes and numbers have declined over the past decade, according to the fishermen.

“There is a lot of development around the river and villages, so the environment surrounding the lake is changing. That could be why the fish numbers are declining,” said U Myint Soe.

Villagers aren’t overly worried about the numbers of fish. “What’s important for people who come here is theiur happiness, and during the festival that always increases – no matter how many fish we catch,” said U Myint from Ta Yet Kone village.

During the day-long fishing festival the villagers fish until the sun goes down. Their bamboo baskets are not always full, but for that one day of the year the lake is always full of their songs, yelps, splashes and chatter.