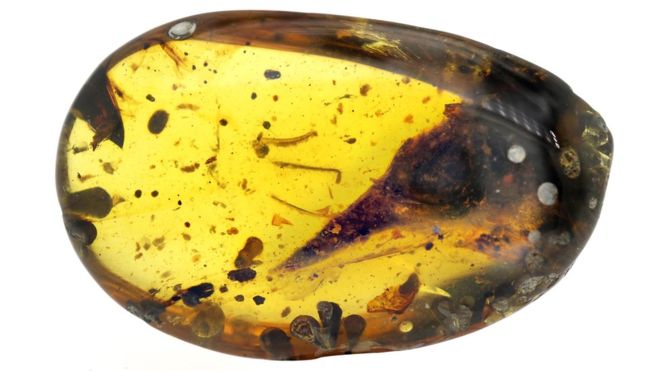 One of the fossils of a dinosaur that has been found in northern Burma for about 100 million years has been found. The head of the creature, nestled in the skull, is one of the smallest dinosaurs ever discovered, including a beak.

This species is one of a group of dinosaurs that originated in the primeval birds. The species of the fossil is only about the size of the smallest bird in modern times. The fossil is known as the Oculudentavis Khaungraae or eye-tooth bird.

The two sides of the head have large eyes like the ones in modern times and narrow eyes to limit light penetration. It is a strong sign that the creature was active during the day.

The parasite can be described in the famous British journal Nature, and can help explain how evolution from dinosaurs to small birds. The smallest dinosaur, like the Microraptor, weighs hundreds of grams, and the feathers weigh only two grams.

The animals that came in very small had some problems. This is how the whole body of the sensor is organized. Or how the body’s temperature is maintained, “said Professor Jim Garrison Oo, a professor at the Chinese Academy of Sciences in Beijing.

The new species is likely to address this challenge. The project was acquired in 2016 in Myanmar, with the owner Khaung Ra donated to the Hupoge Museum in Tianjin. In honor of the owner’s donation, the name of the dinosaur species is now called khaungraae.

In recent years, Myanmar has become one of the most important species of insect pests and diseases in Myanmar. A snake and a dinosaur fossil have been found.