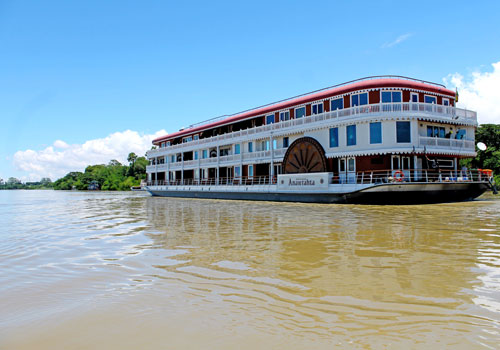 I admit, the notion of luxury travel in Myanmar initially troubled me. To sail, carefree, through the nation’s dry zone at a time of annual flooding struck me as voyeuristic, or aggressively elitist. I feared that comfort would distance me from the “authentic” travel experience that marks Myanmar as a frontier destination. If you don’t have to use a squat toilet or eat arguably-dangerous-to-digest street food, did you really travel in the “real” Southeast Asia?

Then I stepped onboard Heritage Line’s Anawratha River Cruiser, the biggest and newest addition to Myanmar’s luxury river travel scene. As a smiling, thanakha-cheeked hostess offered me fresh fruit tea and a cold towel to wipe the humidity off my forehead, a revelatory thought flashed through my mind: I could get used to this.

High-end travel is a rare opportunity for most people, but I was fortunate to be invited by the folks at Heritage Line on a recent FAM trip, which is travel industry jargon for a free ride offered to travel agents and press. Though the ship accommodates 46 guests at full capacity, we were just 14, all strangers united by a journey dubbed the “Golden Land Voyage”: more than 180 miles (290 kilometres) of river travel, from Bagan to Mandalay. 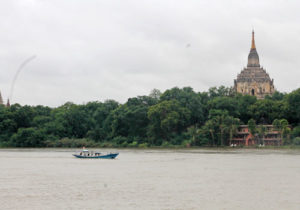 Now, having travelled extensively in Myanmar, I’ve ridden in all manner of vehicles: motorbike, bicycle, trishaw, automobile, train, canoe, motorboat, kayak, propeller plane and hot air balloon. The Anawratha, however, marked my first experience on a luxe cruise liner. Though I have no other similar ships to compare it to, I feel confident in saying this much: River cruises are the most extravagant way to travel.

From my first glimpse, the ship appeared to be something out of a colonial romance novel – Heritage Line says it was designed to resemble “a British colonial paddle steamer”. Polished wooden posts contrast with white Victorian porticos, one to each cabin. On the third level, an indoor/outdoor lounge called “Kipling’s Bar” serves cocktails and fresh juice daily. The top sundeck has a pool.

Two men in red Anawratha polos helped us into the ferry from shore to ship, and in a few minutes we stood onboard. An attendant walked us through the thickly carpeted hallway, past handsome lacquerware and US$3000 frescoes on the walls, to our cabin. Inside, complimentary sun shades and hats sat waiting for us on the bed, along with more pillows than one person could possibly require on a four-night cruise.

The rooms included all the amenities one can hope for, and then some: a hot water rain shower, a Bluetooth speaker, an extravagant ruby-red Victorian daybed windowseat, a kiwi in the fruit basket. Little details, such as complimentary postcards and an old-fashioned telephone by the bed, added to the colonial-era aesthetic.

As we began sailing, it was easy to daydream oneself an explorer from a distant land, seeing inner Myanmar for the first time. The alluvial plains that flank the river are the Bamar heartland, where ancient kings – this ship’s namesake Anawratha being one – built Bagan and the Court of Ava and eventually surrendered Mandalay to the marauding British. Back then, this part of the country was nothing but agriculture and thatched villages, dotted by golden pagodas amid a palm-tree canopy.

For all of Myanmar’s recent changes, these days the countryside looks much the same. As we chugged upstream, I watched an endless loop of water buffalo nosing through paddies drenched in blue and green. There are a few differences, of course: How many times did a farmer stare at me as I stared back, the both of us snapping photos on our smartphones?

In four days there was not one moment where I could not see a glittering spire from somewhere on the ship. It’s more than a mile wide at parts, this river, and at some points I could scarcely make out its banks on the horizon. Moving fast and rich through the plains, the Ayeyarwady swells and overflows during the monsoon season, flooding rice paddies and villages with regularity. It’s a time of low tourist numbers, with prime summer weather in Europe and the United States keeping most travellers from venturing to the wet, sticky tropics.

But rainy season is in fact an excellent time to see Mandalay’s dry zone by river travel. We saw four towns and villages well off the triangular track traditionally beaten by backpackers between Yangon, Bagan and Inle Lake. Though we started in Bagan, we were soon off the boat to visit the famous city’s lesser-known neighbour, Salay, where expert tour guides Tin and Toe walked us through the forgotten colonial outpost. The presence of tour guides was welcome, and a not-so-subtle reminder of one of the logical fallacies of the backpacker mentality: Going it alone may be edgier, but true absorption of culture requires at least some sense of history and language. Having a tour guide checks both boxes.

By the time the ship docked in Mandalay and we’d said our goodbyes to the staff, I realised another unexpected benefit of guided travel: the relationships. In a few days I’d grown closer with Tin Aung, my trusty guide, than I ever have with another backpacker in a hostel or tuk tuk tour. When he gave me his card and told me to call him if I had any more questions (I had asked quite a few questions), I was genuinely thankful. He’s someone I’d like to talk to again sometime. 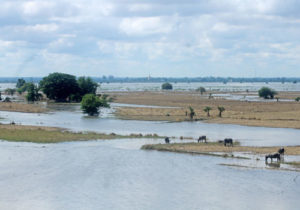 And the excursions he led proved to be a recurring highlight of the trip, a daily adventure into places most tourists never see. In Salay, we heard the stories of U Po Gyi, a 19th-century crony who built a fortress for a house out of paranoia. Fifty-five miles upriver, we walked the thanakha markets of Pakokku, one of Myanmar’s largest trading cities where the best-quality beauty cream can be found. Just north of that we visited Yanderbo, a tiny town where the first Anglo-Burmese peace treaty was signed in 1826, and on our last day we reached Ava and Mandalay, where we took whirlwind tours through the last two royal capitals.

The visits themselves were fascinating, but the production of each excursion was almost equally so. Several times when we were due to disembark, local boys waded into the river to grab the ropes and lash us to trees on shore. Then the men in red polos would appear at the dock, greeting us with a wave and directing us to the ground transportation they’d arranged. Always, a contingent of curious locals would gather at the shore, smiling and waving as we emerged from the boat.

The juxtaposition of our grand ship and their humbler lifestyle was stark, and I asked one of the travel agents at dinner how she reconciles the concept of such decadent travel in a developing country. Here we sat, dining on steak and drinking fine wine, while locals just beyond our windows hoped for a strong rice harvest and not too much flooding. It was the same thing I’d wondered before we left: Is luxury travel a good thing for Myanmar?

“If there wasn’t luxury travel in Myanmar, people like our clients would not come here,” she said pointedly. She’s right: Though most of Myanmar’s yearly visitors are drawn by the low cost of travel in this country, the upper echelon of travellers expects a decadently bigger bang for their decidedly bigger bucks. They also provide much more economic impact. Cabins for an Anawratha voyage start around US$5000 for four nights, and the type of people who can afford such an investment, while rare, are the same type who can bring significant pay-off for Myanmar’s fledgling tourist infrastructure.