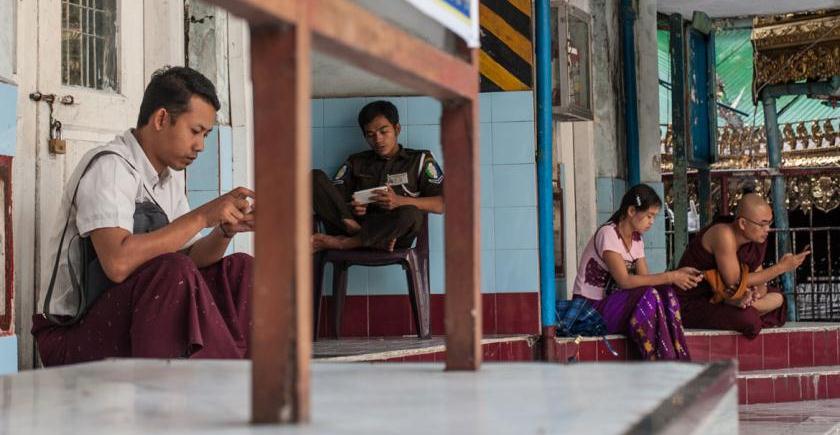 According to We Are Social, Myanmar counted 18 million internet users in 2018. Internet penetration in the country continues to rise at an impressive pace.

This growth is driven by the massive adoption of new digital services that aim to make life better in Myanmar. They are global or at least regional phenomena. These tech companies entered the local market with the firm intention of replicating a successful business model with minor deviation (mostly localisation). Some of the services have disrupted our lives forever.

These are the six digital services that have changed life in Myanmar forever:

In January 2016, Netflix extended its global footprint bringing its streaming services to 130 countries, including Myanmar.

Because of licensing deals, the movies and TV shows available on Netflix vary significantly between countries. Netflix’s catalogue in Myanmar is quite limited compared to that in the United States.

The other major drawback is the payment method. Netflix only accepts PayPal, which is not available in Myanmar, and international credit cards. Don’t even think of paying with MPU.

Netflix is huge. In the US, it is the No. 1 choice for TV viewing, beating broadcast, cable and YouTube. According to a recent report by Sandvine, Netflix takes up 15 percent of total downstream traffic on the internet worldwide.

Its phenomenal success is mainly attributed to its heavy investment in original programming. Netflix has produced a countless number of popular TV shows, such as The Crown, Stranger Things, Narcos, BoJack Horseman, and Black Mirror. Netflix has become an essential piece of millennial culture and, as such, a popular service in Myanmar.

Wave Money is a mobile financial service company born from a joint venture between Telenor and Yoma Bank. Launched in 2016, the technology company counts 1.3 million customers and 25,000 shops across Myanmar.

In a country where a large part of the population has no bank access, Wave Money is a game changer that helps people transfer money across the country in a reliable and cost-effective fashion. According to a recent press release, the company has an amazing 1235pc revenue growth and 2765pc transaction growth year-on-year.

Wave Money competes with TrueMoney and Ooredoo’s M-Pitesan, which also enable users to deposit, withdraw and transfer cash through agents or their mobile wallets.

Grab is a Singaporean technology company that offers ride-hailing, ride-sharing and delivery services across Asia. The company launched in Myanmar in March 2017, and is present in Malaysia, Indonesia, the Philippines, Vietnam, Thailand, and Cambodia. It was competing with Uber and local companies Oway and Hellocab until it acquired Uber operations in Southeast Asia in April 2018, and the famous green vehicle become the market leader in Myanmar.

Grab has been very successful in Yangon due to multiple promotions that are ongoing and drive the service’s popularity. Customers have said that Grab’s standard rates are expensive but the promotions or coupons make them affordable. Grab can also count on a large fleet of taxis (more than 6000) that reduce wait times. It also offers a loyalty programme that is very popular.

Grab is constantly innovating with new services. In February 2018, the company launched Grab Corporate – a free service that allows companies to leverage Grab’s fleet for employee transportation with flexible payment options. In May 2018, it launched its three-wheel ride-hailing service, called Grab Thone Bane, in Mandalay. In July, it launched Myanmar’s first car pool service, which enables passengers to share rides.

Youtube need no introduction. The video-sharing website has been around for 13 years and is the second most popular website in the world, according to Alexa. Combined with Netflix, it represented a quarter of the global internet traffic in 2018. The most popular Youtube channels in Myanmar are DVB TV News, Eleven Broadcasting and 7 days TV, which total more than 450 million views.

Viber, operated by Japanese company Rakuten, is without a doubt the most popular messaging application in Myanmar. The messaging and Voice over IP platform, which is similar to WhatsApp, Line and Wechat, had more than 1 billion users worldwide and 18 million in Myanmar as of 2015.

One of the reasons Viber is so popular in Myanmar is its effort to localise, or “glocalise”, to use the word of Anubhav Nayyar, Viber’s head of business development for Southeast and South Asia. In a recent interview with The Irrawaddy, he said: “We have partnered with various organisations and business groups in Myanmar … We also work with local influencers, such as Sai Sai and Phway Phway.” The platform also develops localised stickers that are very popular with the young generation.

It would be hard not to include on this list the largest social network in the world. With 2.23 billion monthly active users and 18 million in Myanmar, Mark Zuckerberg’s website has changed the face of the internet and had a huge impact on our lives.

Four years ago, We Are Social released an interesting statistic: Facebook penetration in Myanmar was twice as high as internet penetration.

Facebook has been for years the top contributor to internet growth in Myanmar, and is by far the most popular service in the country. Indeed, for some in Myanmar, the internet means Facebook, as it is a unique gateway for photo and video-sharing, dating, job-hunting, gaming and shopping.

The social network is so popular in Myanmar that some companies do not even bother to create or maintain a website but rather focus on developing their Facebook presence.

The social media giant hit the news lately, as it was accused of having done very little to control hate speech in the Myanmar language.

Facebook has always been the face of the internet in Myanmar, but with the emergence of new services, internet users are diversifying their online time. The internet has infiltrated our daily life, helping us to commute, order food or find a job.

And there is more to come: Mobile has been the key driver in the proliferation of digital services in Myanmar. Over the next few years, the growth of fixed broadband will inevitably pave the way for a new breed of digital services: home automation and the internet working of devices.