In places such as Yangon and Bagan, Myanmar’s terrific and turbulent history is explored by thousands of visitors. However in addition to these two locations, there are a handful of other sites that hold a pivotal place in the country’s expansive past.

Between Yangon and Bagan, up through the heart of middle Burma, travellers in Myanmar can journey along the less-explored, undulating narrative of the country.

Bago is just 50 kilometres north of Yangon and yet over the last couple of decades it has slipped off the Myanmar tourism trail. Sampan Travel would place it firmly back on a Myanmar travel itinerary.

Many visitors to Bago find their way towards the Win Ga Baw elephant camp (which we recommend) or the Mwe Paya Snake Temple (which we don’t.) These new attractions have superseded the more prosaic sites such as the Shwemawdaw Pagoda which, standing at an impressive 114 metres, is the country’s tallest stupa, and Shwethalyaung, thought to be Myanmar’s oldest reclining Buddha. 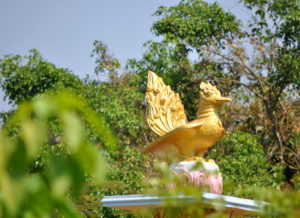 We would direct history buffs towards the remains of the Kanbawzathadi Palace, built in the 16th Century by the Bamar King Bayinnaung (described by the historian G.E Harvey as “the greatest explosion of human energy ever seen in Burma”). After the death of Bayinnaung, the Bamar were kicked out of Bago by the Arakanese and the buccaneering Portuguese privateer Filipe De Brito E Nicote. In the mid 1700s, the military leader Aung Zayya from modern-day Shwebo took over the city, established Yangon as his capital, and the city faded into history.

From Bago, those travelling in Myanmar can journey up to Pyay and the ancient Pyu city of Sri Ksetra.

Pyay, known as Prome to the British, sits upon the banks of the Ayeyarwaddy. Though today it is a snoozy dry-zone town, it was the hub of industry during the colonial days and a transit point for the timber trade. During the Second World War it was where General Bill Slim brought together the raggedly bunch of British and Indian forces in an ill-fated attempt to push back the Japanese advance.

Today, most visitors to Pyay are there to explore Sri Ksetra, known as “Thayekhittya” in Burmese, thought to be one of the oldest known sites of civilization in the country. The city is said to have been built by the mad King Duttabaung, commanding a team of ogres and other supernatural beings some time before the 5th Century. The city flourished as a peaceful city until it was razed by the marauding Nanchao from China in the 9th Century.

The site stretches over 5 square kilometres with a small museum in the centre. It is possible to hire a tuk-tuk or bullock cart (we recommend the former) to explore the mammoth pagodas and remains of the ancient city walls. These temples do not have the elegance of those of Bagan, but it is through their great, hulking presence – as goats tinker about their foot and small children skip along their ledges – that their age is forcefully felt. 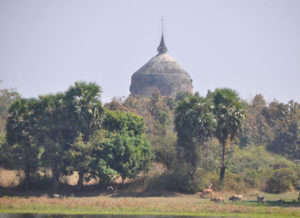 A short hop from Sri Ksetra is the ancient town of Beikthano (which can be translated at “Vishnu City”), thought to have succeeded Sri Ksetra as the predominant city of the region, and near the modern-day town of Taundwingyi.

From here it is possible to jump forward to the 20th Century and visit Natmauk, childhood home of General Aung San.

Aung San was a student activist and young nationalist that demonstrated against British rule in Burma throughout the 1930s. During the Second World War he marched into Burma alongside the Japanese leading the newly-formed Burma Independence Army. Later disillusioned with the Japanese he took his forces to join the Allies in their reconquest of Burma. After the war he steered the country towards independence.

Before any of this, in 1915 he was born as “Htein Lin” the youngest boy of a family already steeped in the Burmese resistance movement: his grandfather Bo Min Yaung had fought against the British annexation of the country and had been beheaded in 1886. 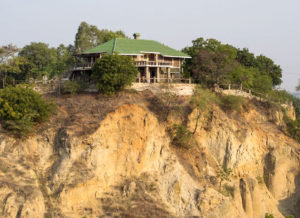 In the nearby town of Yenangyaung, Htein Lin’s primary school still stands. It is in this town that we recommend you spend the night. The charming Lei Thar Gone Guesthouse is an unexpected delight and one of the best places to stay in Myanmar. Up on a hill overlooking the Ayeyarwaddy River, the rooms are cosy, the food homely, and the views conducive to reflection and poetic thought.

A pleasant way to end this ancient Myanmar journey is to wake early and catch the morning train to Bagan. This is the train that originates in Yangon. By embarking in the dry zone (Taungdwingyi usually the most convenient station) travellers can miss a potentially disruptive night’s sleep and purely enjoy the landscape of Middle Burma in the morning.

Arrive in Bagan well-rested, ready to jump back into a little more Myanmar myth and legend .