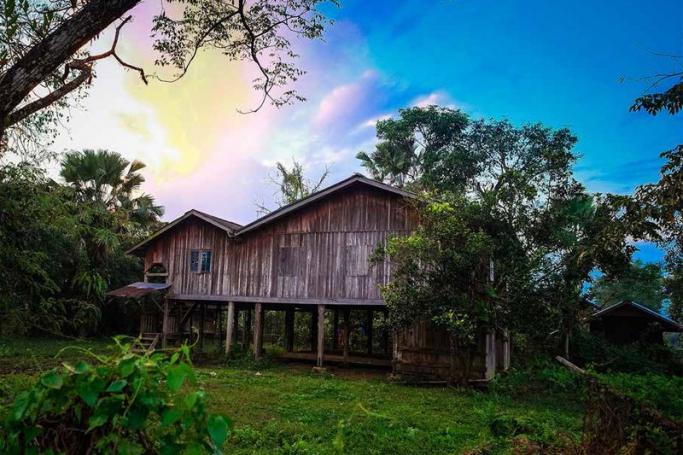 Nearly every visitor to Thailand knows the “Golden Triangle” region, where the borders of Myanmar, Laos and Thailand meet. Geographically, this area includes Myanmar’s Shan State, Luang Namtha and Phongsali provinces in Laos and the northern Thai provinces of Mae Hong Son, Chiang Mai, Chiang Rai and Nan. It is a region heavily populated by hill tribes and is notorious for once having been the world’s biggest producer of opium and its derivative, heroin.

Lesser well known is “The Triangle”, the area where the borders of Myanmar, China and India meet. For some time it has been possible to apply for a special permit to travel to this region in Myanmar’s northernmost Kachin State.

I travelled to “The Triangle” last July during the rainy season and was interested to learn if hill tribes groups there are growing opium, as they do in Shan State on the border with China. In a report released last December, the United Nations Office on Drugs and Crime said opium was grown on 63,800 hectares (about 158,000 acres) in 2013, up from 61,200ha the previous year. The UNODC estimated that opium production in the two countries in 2013 was 762 tons, with most harvested in Myanmar. The report did not give figures for Thailand for 2014, but said it produced four tons of opium from 265ha in 2013.

My destination was Putao, in the eastern foothills of the Himalayas about 220km by air from the Kachin State capital, Myitkyina. But first I needed to travel to Yangon, where I arrived on July 13 and sought the assistance of an old friend, U Rakwi Pung, 70, a Rawang from Putao and the former managing director of Snowland Travel & Tours, to apply for my special travel permit.

The Ministry of Hotels and Tourism permit was issued via email from Nay Pyi Taw on July 20 and I travelled to Putao with an American couple because it was necessary to book a package tour with a licensed guide. The package tour cost US$1,859 a person and included all flights and meals, two nights in a guesthouse in Putao and a five-day trekking tour of Lisu villagers.

We flew from Yangon to Putao via Mandalay and Myitkyina on July 22, a journey taking about four hours. After handing over nine copies each of our passports and visas to Immigration officials at Putao airport where we were met by our guide, Ahyin, an English-speaking Rawang from Myanmar Frontier Travel & Tours, and taken to the “Htawan Razi” guesthouse.

We planned our trek at meetings over the following days with a group of elderly men known as the “Lisu cultural committee”, who invited us to visit their villages, in which all the residents are Christian. Most Lisu Christians in Putao are members of the Church of Christ. We arranged to visit the villages of Mulashidi, Muladi, Pamati, Mansakun, Sitilaw, Panghkaing and Dagushu Tsar. Homestay visits were arranged to more closely experience the rhythms of village life. Nobody seemed to know anything about opium. A good Christian does not consume intoxicants.

I took the opportunity to explore Putao, formerly known as Hkamti Long, meaning “Golden Place” and in a picturesque valley setting on the Nam Lang River. The commercial and social centre of the town is the daily market, open from 6:00am to 7:00pm. An impressive sight in the town is the hilltop St Andrew’s Roman Catholic Church. A small road heads north to Lisu villages and muddy tracks lead to the distant mountains that have snow in winter.

The main road to the east heads to the Nam Tun valley where Buddhist Hkamti Tai farmers grow rice, past the airport and further afield to Machanbaw Township, where most of the population is Jinghpaw, one of the main Kachin sub-groups, along with Lisu and Rawang. The narrow, asphalted road ends at a suspension bridge over the Malikha River about 14 miles from Putao.

It is possible in the dry season to take a boat upriver towards Nam Khan and visit a large Rawang village where the American missionary Robert Morse and his family lived for several years in the 1950s, during which time he introduced citrus orchards to Kachin State. It is no longer possible to travel from Putao towards China, though there were signs of an active trade in Myanmar mahogany that is being smuggled across the border.

At the airport, another road heads south through the jungle to Mulashidi, where you can see the abandoned compound of the Morse family, who were forced to leave Myanmar in 1965. Overlooking the Mula River is the luxury Malikha Lodge, which was closed for maintenance during the wet season. The government was building a new bridge over the river on the road, that leads via Sumprabum to Myitkyina, a trip that can take three days.

Heading south from the market is a street lined with airline offices and a few guesthouses, as well as an office of the United Nations Development Programme, where I obtained some information about Putao and its environs.

Paddy is grown on the plain and dry rice in the mountains. The villagers grow citrus fruit and vegetables in their home gardens. Pigs, poultry, goats, cattle, water buffalo and horses abound. The villagers forage in the jungle for herbal medicine, pan for gold in the rivers, hunt in the rivers and burn charcoal for domestic use. Bartering
is common. Electricity is available for five hours each evening. The ethnic composition is 50.79 percent Lisu, 31.9 percent Rawang, 8.69 percent Jinghpaw, and 7.17 percent Hkamti Tai (Shan). Bamar comprise 0.78 percent of the population and are mainly police and military.

The ethnic diversity is obvious, but as most of the hilltribes are Christian and only wear their striking traditional attire during festivals, there is not much local colour in Putao.
Health problems in the area include malaria and respiratory diseases and there is one public hospital. The township has 77 primary schools, four middle schools and two high schools and a public library. There is also a prison that was holding about 40 inmates, most of whom were Lisu and Rawang.

A rich lode of amber is mined in the hills west of Putao towards the border with India.
Putao is a kind of Shangri-La in Myanmar, and the mountains to its north include Hkakabo Razi, bordering Tibet, which at 19,320 feet (5,889 metres) is the highest in mainland Southeast Asia.

Interestingly, there are few residents of Indian or Chinese descent in Putao. On a small hill overlooking the valley of the Hkamti Tai north of Putao is the abandoned ruins of Fort Hertz, a military post established by the British in 1914. It is named after William Axel Hertz, who led expeditions into the area in the 1880s and later became the first Deputy Commissioner of Putao District.

Nearby is a museum worth visiting with exhibits of flora and fauna from Hkakabo Razi National Park, an ASEAN Heritage Park. It is sponsored by the Ministry of Environmental Conservation & Forestry. Another “cultural museum” about the Rawang people is being established.

Hkakabo Razi National Park is in Kachin State – and Myanmar’s –northernmost Naungmung Township and was established in 1996 for eco-tourism activities. The flora ranges from evergreen, hill pine and moist upper deciduous forests to a botanical wonder, the black orchids.

The fauna includes rare species such as takin, musk deer, blue sheep and black barking deer, and many insects and butterflies. The dramatic scenery, the flora and fauna and the rich cultures and diversity of the region’s indigenous people make Putao a gateway to one of the last paradises on earth.

On July 29, we left left Putao by plane for Myitkyina, where we travelled by road the 27 miles (45km) to Myitsone, where the confluence of the Malikha and N’Maikha rivers creates the Ayeyarwady. In 2011, President U Thien Sein suspended work on a controversial Chinese-backed hydroelectric dam at Mytsone for the duration of his term in office.

The attractions in Myitkyina include the Kachin State Cultural Museum that features exhibits from all facets of life of the Kachin people. One of the most spectacular events in Myitkyina is the Manau Festival. It brings together Kachin sub-groups from Myanmar and throughout the region and the world and marks Kachin State National Day on January 10.

There are many Lisu villages in Waingmaw Towmship, opposite Myitkyina on the eastern side of the Ayeyarwady and a busy trading centre for goods brought across the border from China.

There are number of travel options to travel south from Myitkyina to Mandalay and beyond. One is to make the entire trip by train but a more pleasant journey, if you have the time, is to take the train to Bhamo and travel from there to Mandalay by government ferry boat.