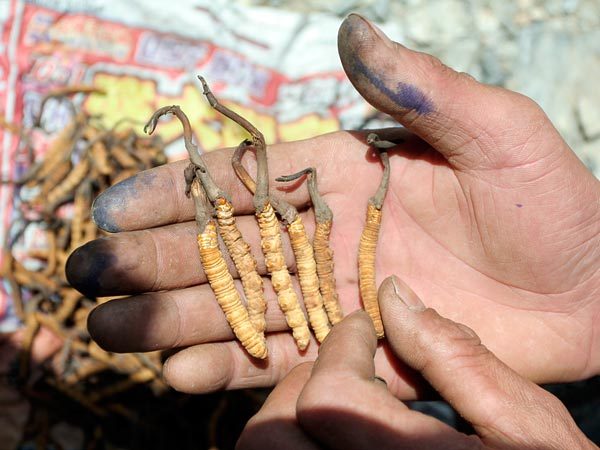 Kachin, a part of the world known for its valuable medicinal properties, is known as Shibdee. I would like to show you just a little bit about finding a branch.

There are rare trees and animals in the mountains covered with ice. In the winter In the summer, a strange thing called a tree. This species is only found in very high glaciers. China, where the Himalayas are located, is a mountainous area of ​​high mountains. Tibet Nepal, Nepal In the mountains of Bhutan and northern Burma. It is a combination of traditional Chinese medicine and very expensive.

The origin of the shingles, which is known as the shingles, is strange. Pregnant eggs are very cold in the winter, so the eggs in the soil are not fertilized by mammals. He used to live in winter and spend the winter.

During the winter, the larvae remained relatively stable under the earth, but they were trapped by a fungus, which paralyzed the larvae, and in the summer the larvae appeared as grass-like hooves. These sprouts grow from 5 cm to 15 cm long. According to locals, that was the time to survive as a worm from a worm’s life. This is why freezing of insects and worms in the ice. The ice melts and the plants become visible when they see the ground.

As the ice melts, the local hounds gather around the plant’s head when a small ball emerges from the head of the underground larvae. In the mountainous areas, many hunters are known to have medicinal properties in the mountains.

Shibdee, which is very beneficial for health, is also very expensive. In one of the letters I read, he paid one thousand kyats each for about $ 30,000 per pound. Bats found in more than 10,000 feet are more affordable.

The powerful medicinal properties of the shingles are considerable. It has a sweet and sour taste. They are usually dried and marketed for powder.

(1) High nutritional value in the sick and naturopathic patients as soon as possible.

(2) Smooth up the function of the kidneys

(5) Strengthening the men It can help you to increase your immune system. Improved lung function

(6) Women’s Health Young and old It can be very beneficial for the body to recover.

Why is it so rare? It is very expensive for medical reasons. There are also people who take regular supplements. They are available in China, China and China. Japan, Japan It was purchased from countries such as Korea and Korea. Some athletes also use the gene for high resistance and fatigue. Some people just put it in a pot. It is also used in eating tea. In Tibet, there has been a large increase in the availability of this gene and a growing number of money-makers.

Part of this species can be found in the high mountains of Kachin State in northern Burma. Systematic study of partial shrubs; If the research is carried out and the commercial farming of the popular Korean ginseng, there is no significant environmental damage to the locals and not only income but also income. I dreamed of a new job and a new job opportunity.