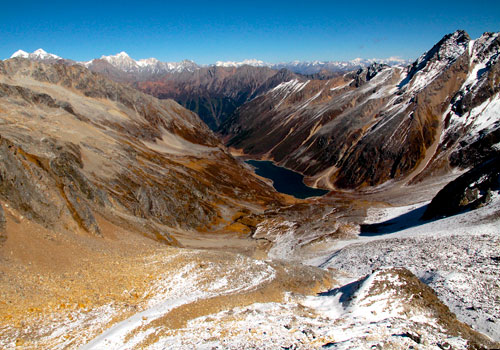 The view was stunning: From the summit at 5150 metres (16,895 feet) above sea level, snow-capped peaks could be seen in all directions, dazzling against a deep blue sky. Looking north, there were Hkakaborazi and Gamlangrazi, Southeast Asia’s highest mountains, some 700m higher than our vantage point.

Below us was a relatively broad valley at 4300m with a kilometre-long dark blue lake in the centre. We could see a tiny snow trail leading from the pass below, winding its way toward China and Tibet. We heard there was a trading post a couple of days’ walk away in the very high mountains. There, medical roots and herbs from the Himalayas could be exchanged for salt, tea and consumer products. The TVs and pocket radios we had seen in the villages we had passed through had come from there.

The day before, we had arrived at our base camp at about 4500m. It had taken us some 145 kilometres (90 miles) of arduous trekking to get there, following the course of the rivers on rugged, small trails, crossing hundreds of smaller and larger streams and dozens of slippery, flimsy bamboo bridges, some 80m long and high above the foaming rivers.

Two weeks before, our local guide had welcomed us at Puta-o airport in northern Kachin State. From there we continued with a gang of young motorcycle riders who took pride in taking the muddy trails and river crossings at top speed. They dropped us off at the small village of Gawle, our muscles aching from keeping balance. Next day we crossed a ridge to the village of Pangnamdim on the Tamai River. 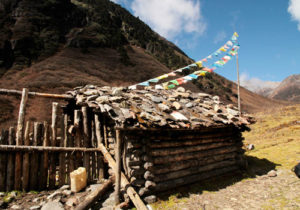 Our core group was composed of four: two Austrians with a passion for the Himalayas; U Ah Yin, a local Rawang, born in the area, fleet and steady of foot despite his 70 years; and a cook.

With the winter paddy fields ripe for harvest and the November 2015 election only days away, to find the 10 or so porters we needed turned into quite a task.

The footpath from Pangnamdim is narrow, rugged and slippery, and – high above the river – often dangerous. For the first week we traversed thick forest, falling into a routine of walking, packing and unpacking, stopping for simple meals.

Eight days on the road brought us to the village of Gawai, one of the most remote polling stations in the country and catering to 28 eligible voters. In the evening we sat jam-packed in the house of the village head, watching election reports from all over the country on the village television.

The next day we reached Dazungdam village, from where we turned northwest toward the Seinkhu valley. Here we took on eight cheerful boys and girls in their early 20s as porters. Our admiration for their speed and sure-footedness on the slippery path, and their easy-going and fun attitude, only grew along the way. Their high spirits were tempered only when temperatures dropped far below zero. Our cook could set up a kitchen anywhere and feed 15 people from a single wok, morning, noon and night.

Conservation is already important. Apart from a mongoose that crossed our trail we did not see any wild animals. Being in the Hkakaborazi National Park, which is considered a global biodiversity hotspot, we had hoped to see some larger animals such as deer or takin, or at least some bigger birds. But even smaller birds were rare. Mostly what we saw was leeches, sand flies and a few gigantic ticks. Every villager we met carried a slingshot or a crossbow with poisoned arrows.

Dazungdam marked the last village mainly inhabited by the Rawang, an ethnic Kachin tribe of some 60,000 to 90,000 people. The path then turned steep and much rougher than before, marking a different and more alpine zone. Over the next two days we climbed every day for at least 1000m. Finally, after 11 days of walking, we entered the world of the Himalayas and with it, the Little Tibet of Myanmar.

Mading (2550m) was the first Tibetan village we reached, via three lofty bamboo bridges and a number of climbs along ladders and ropes. Colourful prayer flags welcomed us. The Tibetan homes were built to withstand a much harsher climate than the bamboo Rawang houses farther down.

The houses were surrounded by corn and barley fields, and draft cattle ploughing the soil. We stopped in the house of the local lama, and over butter tea, hot milk and roasted corn inquired how best to reach Malikhurazi (4907m), our destination.

What we learned was heartening and discouraging at the same time. The villagers consider Malikhurazi, which is the source of the Malikha River, a sacred mountain, placed by Lord Buddha himself. Any animal or human approaching too close will fall sick or die. We decided to scout for other peaks farther up the valley. 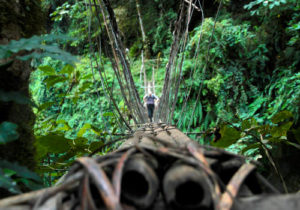 Two days later we set up a base camp at a soft plateau above the Seinkhu valley from where we continued, walking slowly in the high altitude, to Lama La, the high pass at about 5050m. There, under the fluttering Tibetan prayer flags and looking down on majestic peaks in India, Myanmar and China, we realised that most of the unnamed peaks we had seen on Google Earth were out of reach. To scout them properly and find a safe access route would have taken at least another two or three days. We opted for a smaller peak adjacent to the pass with an ascent over a rocky stone field and a final steep ridge climb. We solemnly built a stone man on the summit, placed a flag beneath it with dates and names, and claimed the peak as “Austriacorazi”.

And then it was back to civilisation. Soon swallowed up again by the tropical forest and confined by the rhythm of the river trail, the descent was as exhausting as the climb, though nothing could dampen our happiness. How many places on earth are still so remote, so unspoiled and so unexplored? We felt honoured to have experienced its isolation, distinctiveness and beauty.

Tibetan Buddhists believe that in the Himalayas there are a number of hidden, mystical and outstandingly beautiful places called beyuls – sacred places that can be reached only through hardship, and where life is said to survive even if the rest of the world were destroyed. It is a nice thought that in the Himalayas such a hidden valley exists, adding another piece to the jigsaw puzzle that makes up the many faces of Myanmar.