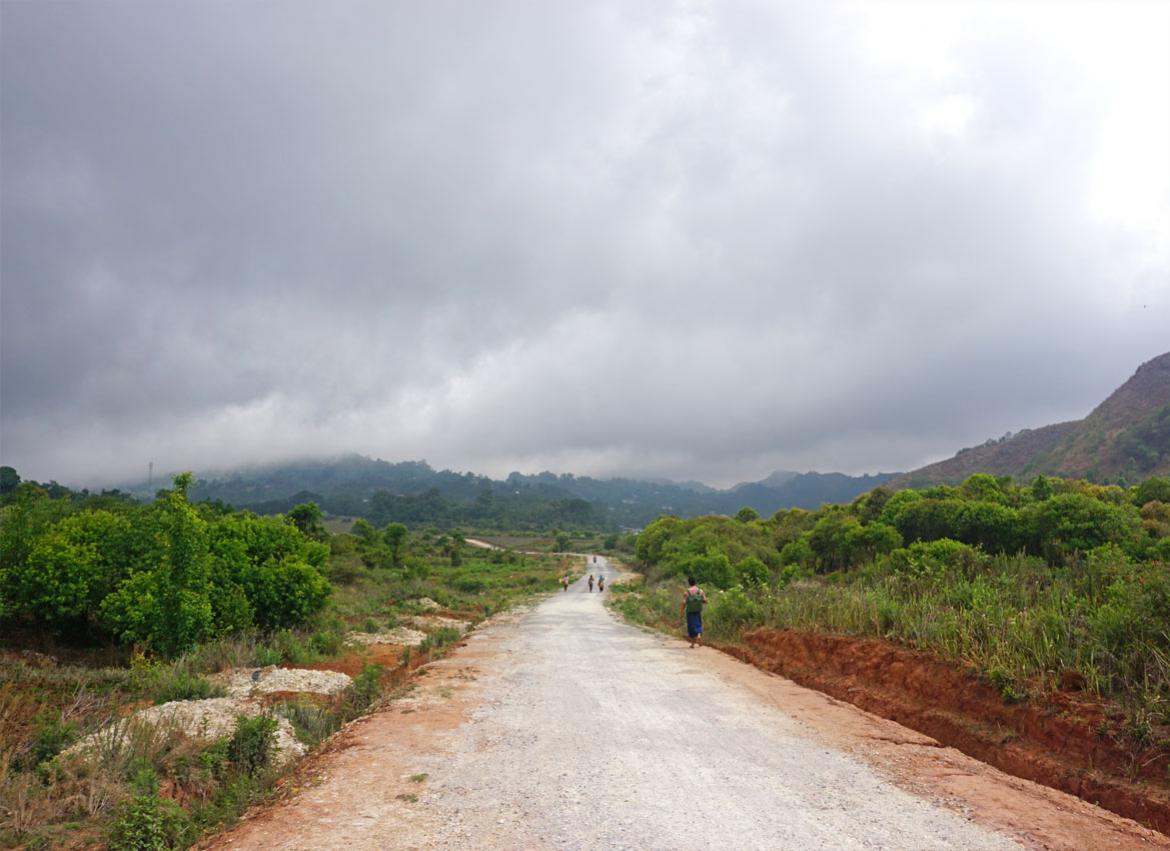 By mid-morning we were looking down upon striking views of the Pindaya valley and the Pone Taloke lake at its centre.

To familiarise ourselves better with the “Danu Trails”, the web of paths and tracks that branch out through the hills of Pindaya, two of us from Sampan Travel had journeyed out of Yangon to team up with jolly local trekking guide Ko Zaw. In turn, Ko Zaw had enlisted the assistance of Au Gyi. Small, stocky, indefatigable, and unflappable, Au Gyi was the opposite of Ko Zaw who, for all his vim and enthusiasm, was prone to stumbles and wheezing.

We had congregated that morning in the garden of a friend based in Pindaya, and after a breakfast of pancakes wrapped around slices of local apples and honey, we strapped on our boots, gathered our bags, and commenced our climb up into the hills.

Day One: Into the Hills

By midday we reached the Danu village of Dudel Yee. This turned out to be Au Gyi’s own village and it was in his house that we ate lunch prepared by his wife and mother-in-law. His two daughters peered at us over the window-ledge with the same twinkling eyes as their father.

Lunch was large and leisurely – chicken curry, fried bean gourd, water-cress and peanut salad. Ko Zaw was in no hurry to leave afterwards so we took our coffee outside and snoozed in the sun while a family of chickens hopped about our bags. Our itinerary allowed for such downtime, Ko Zaw assured us. 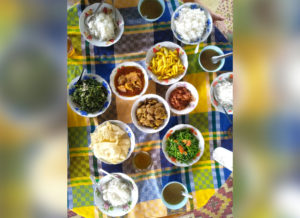 After lunch, once through the tea fields we entered a communal forest where we were enveloped by the sound of a thousand cicadas. Displaying an unexpected dexterity Ko Zaw leapt from the path onto the trunk of a tall tree and caught one of the noisy insects, unharmed but whirring its metallic wings manically.

We arrived in the Palaung village of Taung Myint Gyi just before the sky ripped apart and the rain fell. The downpour was short-lived, and we were soon able to clean ourselves as Ko Zaw and Au Gyi prepared supper.

Our evening meal was eaten by candlelight, washed down with a bottle of Grand Royal Whiskey which Ko Zaw brought out of his rucksack with much panache and a roguish wink.

He was slightly less jolly the following morning. The day began with a brutally steep-incline. With his face set in grim determination, in silence, he stolidly led the way. Au Gyi, carrying the bulk of all our gear, took the rearguard, not breaking a sweat.

By the time we reached the Pa-O village of Mal Nal Tuang, the Sampan Travel contingent was felling sore and, under the gaze of a brigade of local children, we nursed ourselves with plasters and Tiger Balm.

The afternoon once more begun by descending through tea fields. Young women walked gracefully past us with the paline tea baskets strapped to their backs; within some were not leaves but babies who eyed us suspiciously as they bobbed past.

As the golden hour fell upon usand the light from the setting sun rendered each moment more beautiful than the one before, boys from the village of Myay Char emerged from the fields and games of chinlone began. 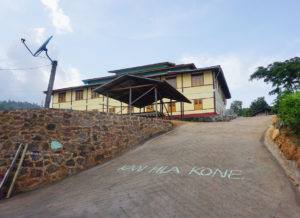 Sooner than expected the monastery of Kyan Hlar Kone came into view. Here we washed, ate, and prepared our beds for the night before slipping off into a neighbouring outhouse and – with a few cheroots to hand – joined the men and boys of the village watching Man United play Huddersfield Town.

Next morning Ko Zaw had business to attend to in town so after a hurried goodbye spluttered off on a motorbike down the hill.

We followed on foot along with Au Gyi – whistling, absent-mindedly, spinning his hat – and Ko Zaw’s replacement: a regional guide called Say Yah Oo and his young wife.

Down from the hills it was noticeably warmer. At a bridge over a small tributary to the Zaw Gyi Creek two of us played a quick game of Poohsticks while Au Gyi bathed his feet in the water and Say Yah Oo stripped right down to his underwear and plunged in.

It was the last glorious moments of the trek. In less than an hour we were back in Pindaya. Lunch was to be had at the newly-opened restaurant Wa Tae and with signal restored our phones began beeping as messages pinged in. It was Monday, afterall.

Soon thoughts would revert to Yangon. But not yet. We had twenty-four hours until our bus to the city. Time for another swim at Zaw Gyi Creek, perhaps. And there was supper at the boutique hotel Cottage Houseto look forward to. The return to Yangon would come. But not quite yet.