The legendary Zaw Wait, who broke the British record

There is a two storey wooden house at South Okkalapa Street. There was a man who lived in the house once, a well-known man in the jungle. This person is no other. It was U Zaw Wai’s older brother. U Zaw Wai is not only famous in Myanmar. He was also prominent in India and the British Empire. This is because he received a honorary degree in Burma, not only in Burma but also in India and the British Empire as a whole. And Zaw Wai Wint was the first Burmese to ever compete in the Myanmar Olympics, even though he had never dreamed of competing in the World Olympic Games. 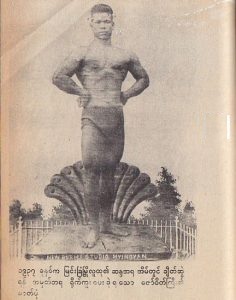 Zaw Wai, the first Myanmar sportsman to compete in the 11th Olympic Games in Myanmar His mother-in-law and mother-in-law. March 7, Hanthawaddy District Kawkareik Township, Kunming Township. Born in the southern part of Nat Sin Kone. Both parents are Karen. She is the youngest of three siblings. New siblings are not older sisters; And her younger sister Zaw Shein.

The name Zawawaw was not a name when he was growing up. The name that he was born to when he was young. The grandfather was a wise man, and his grandparents named him by name. Not only did Zaw Wai not only honor Zaw Wai, but also his other relatives. First of all, The Buddha said: He has been known by many names as Wai Phyo. Zaw Wai was only an adult when he was growing up, but at a very young age he was very handsome. At 4 years old, he can stand upright.

At the age of seven, he began his education at the Nunsin Kone Village Primary School. He is bored, but has good memory, and he has a regular yearly exam. Secondary education was taught in seventh grade teacher and successfully completed seventh grade. In 1927, U Zaw Wai was granted the opportunity to attend the Brigadier Vennavitz High School, with the help of his uncle. Even though they are in seventh grade, they do not speak English, so they begin learning in the third grade. His maternal grandfather died suddenly of tuberculosis and returned to his native village to work in farming.

Then, U Zaw Wai was granted the opportunity to attend an E.T.CEC course at Yangon Baptist Training School in Rangoon. In 1929, he completed his teacher training and worked as a primary teacher in the Kyun Oo Kyun Primary School. After school, you can take the train from Mingalar Nyunt Nyunt Tunnel on the 103rd Street to Yangon Metro Station and take the train from Huain Road to Hpakant. Walk from Hue Street Station to U Bon U Primary School in the Forest Road. The same is true in return. 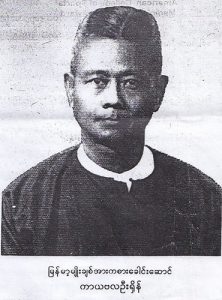 On the way home from school everyday, we saw a group of young people practicing sports in front of a house near U Ohn Khaing train station near the Yangon Metro Station, and there was a sign with the English sign “Strength and Health Club”. Some lift heavy weights; No, not at all. Some are barbarians, Some practice double bar. Their body mass is as much as a muscle mass.

During his tenure as a teacher, Zaw Waw joined the Strength and Health Club at the Railroad Workers’ Apartments on U Ohn Kha Road near Yangon Metro. In 1929, U Zaw Wai began training with weight trainer Calvin U Shein on the Ayeyarwady Road. In the 1930s, the body of Myanmar physicist U Shein of Burma held the Asian Standard Weightlifting Competition, with Zaw Waik making his first appearance in front of an audience. With a whopping £ 280, he broke Asian standards and became famous in the sports and the outside world.

In 1931, Zaw Wai’s solo weightlifting competition was held at the Myanmar Weightlifting Federation, making it impossible for Asia to lose 144 pounds in Asia without two Olympic medals. The Myanmar Weight Watchers Association chairman and party acknowledged Zaw Wai as the most prolific figure in the country. In 1923, U Zaw Wai made no mention of the National Amateur Police Force in 1923. Large muscles move. The three men walked in one direction and walked to the other end of the stage. From the floor of the nine-foot ceilings, Samantha jumped into the belly of Zaw Win, and Zaw Wak Wan rose and gave a salute to the audience. In addition, Zaw Wai’s necklace hangs 10 people on each side to power them. 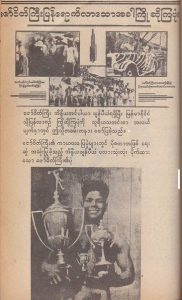 In 1934, U Zaw Wai broke the British record again by breaking 695 pounds. The second National Police National Conference of 1934 was held at the National Hall of the Union, and Zaw Wai spoke with his teacher, Kaceen Shein.

In addition, the Youth Economic Development Association presented a photo of a local poet and Zaw Wai Gyi. Distributes physical health papers. U Zaw Wai himself went to the countryside to talk about physicality. At that time, Zaw Waw’s physical galleries were filmed while filming the Diamond Crown. During the funeral of his nephew in nine villages, Kunming Township, a funeral was held in the center of the mausoleum at the request of the rural youth.

In 1934, U Zaw Waw traveled to Japan with a study team led by U Myo Lwin, a national school teacher. Malaysia Singapore Taiwan Cancer He also visited the Philippines. In 1945 he served as a bodybuilder at the Asian Youth Union. During the Japanese era, the Myanmar Broadcasting Station broadcast daily health exercises organized by Zaw Waw. U Zaw Waw served as the Deputy Director of the Burmese Personnel Department under the Dr. Ba Maw government. 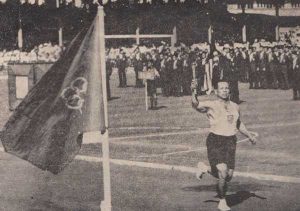 In 1946, the Burmese magazine No. 1 was published in June with the slogan of a post-war reconstruction of the country. That same year, Calvin U Sine, Mr. Frank Hastings; U Thuzin The Olympic Association of Burma was formed with the efforts of U Zaw Wai. 1948 U Maung Child, U Tun Nyein; A team of researchers, including U Zaw Waw, visited Europe and the United States. In 1950, the National Bodybuilding Council was formed, and in 1951, U Zaw Wai was appointed Chief Executive Officer. In 1954 he was awarded the prestigious B.A. He was promoted to Director General in 1955. In 1965, he retired from the Directorate of Instruction.

U Zaw Waw is a journalist, journalist and editor of The Myanmar Times. Economic growth Development; Pillar Thunderbolt He has written articles in the Hanthawaddy Magazine. Also, Olympic editions and sports brochures. He has also published a book on sports and psychology. He wrote a football game as a columnist in the Hanthawaddy newspaper. U Zaw Wai was awarded the National Merit Award (Second Grade) by the 1980 State Council. In 1990, UNESCO was awarded the Asian and Pacific Athlete of the Year Award in UNESCO in Ottawa, Canada. In 1992, he received the Sports Architect Award from the World Olympic Committee. Zaw Wai Htwe, the hero of the Myanmar Sports Hall of Fame, died on November 25, 2000 in Yangon. He was survived by two children and eight grandchildren.